Book of Judith and a Revision of Mesopotamian Chronology 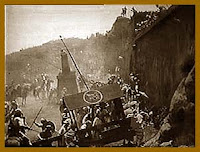 In 1985, Lester J. Mitcham had attempted to identify the point of fold in the Assyrian King List [AKL], necessary for accommodating the downward revision of history.[1] He looked to bridge a gap of 170 years by bringing the formerly C12th BC Assyrian king, Ninurta-apil-Ekur, to within closer range of his known C14th BC ancestor, Eriba-Adad I.
In the same publication, Dean Hickman had argued even more radically for a lowering, by virtually a millennium, of formerly C19th BC king Shamsi-Adad I, now to be recognised as the biblical king, Hadadezer, a Syrian foe of king David of Israel.[2] [We ourselves have accepted this adjustment].
Prior to all that, Dr. Immanuel Velikovsky had of course urged for a folding of the C14th BC Kassite king {and el-Amarna correspondent}, Burnaburiash II, with the C9th BC Assyrian king, Shalmaneser III, who had conquered Babylon.[3] [We have also accepted this adjustment].
And there have been other attempts as well to bring order to Mesopotamian history and chronology; for example, Phillip Clapham’s attempt to identify the C13th Assyrian king, Tukulti-Ninurta I, with the C8th BC king, Sennacherib.[4] Clapham soon realised that, despite some initially promising similarities, these two kings could not realistically be merged.[5]
Whilst all of these attempts have some merit, other efforts were doomed right from the start because they infringed against established archaeological sequences. Thus Mitcham, again, exposed Emmet Sweeney’s defence of Professor Heinsohn’s radical revision, because of its blatant disregard, in part, for archaeological fact.[6]

Here I want briefly to propose what I think can be a most compelling fold; one that (a) does not infringe against archaeology, and that (b) harmonises approximately with previous art-historical observations of likenesses between 13th-12th centuries BC and 9th-8th centuries BC art and architecture.[7] And it also has the advantage - unlike Mitcham’s and Clapham’s efforts - of (c) folding kings with the same name.
I begin by connecting Merodach-baladan I & II (also equated by Heinsohn[8]), each of 12-13 years of reign, about whose kudurrus J. Brinkman remarked:[9]

Four kudurrus ..., taken together with evidence of his building activity in Borsippa ... show Merodach-baladan I still master in his own domain. The bricks recording the building of the temple of Eanna in Uruk ..., assigned to Merodach-baladan I by the British Museum’s A Guide to the Babylonian and Assyrian Antiquities ... cannot now be readily located in the Museum for consultation; it is highly probable, however, that these bricks belong to Merodach-baladan II (see Studies Oppenheim, p. 42 ...).

This is already too striking, I think, to be accidental, and it, coupled with the Merodach-baladan pairing, may offer far more obvious promise than have previous efforts of revision.
There is also lurking within close range a powerful king Tiglath-pileser, variously I & III. Common to Tiglath-pileser I/III were a love of building (especially in honour of Assur) and hunting, and many conquests, for example: the Aramaeans, with frequent raids across the Euphrates; the Hittites (with the possibility of a common foe, Ini-Tešub); Palestine; to the Mediterranean; the central Zagros tribes; Lake Van, Nairi and Armenia (Urartu); the conquest of Babylon. Just to name a few of the many similarities. I think that historians really repeat themselves when discussing these presumably ‘two’ Assyrian ‘kings’. Consider this amazing case of repetition, as I see it, from S. Lloyd:[10]

The earliest Assyrian references to the Mushki [Phrygians] suggest that their eastward thrust into the Taurus and towards the Euphrates had already become a menace. In about 1100 BC Tiglath-Pileser I defeats a coalition of ‘five Mushkian kings’ and brings back six thousand prisoners. In the ninth century the Mushki are again defeated by Ashurnasirpal II, while Shalmaneser III finds himself in conflict with Tabal …. But when, in the following century, Tiglath-pileser III once more records a confrontation with ‘five Tabalian kings’, the spelling of their names reveals the fact that these are no sort of Phrygians [sic], but a semiindigenous Luwian-speaking people, who must have survived the fall of the Hittite Empire.

I think that we should now be on safe grounds in presuming that the ‘five Mushkian kings’ and the ‘five Tabalian kings’ referred to above by Lloyd as having been defeated
by Tiglath-pileser I/III – but presumably separated in time by more than 3 centuries - were in fact the very same five kings.

If this revised scenario is acceptable, then it would absolutely demand that the C10th BC’s two-decade plus ruler of Babylon, Nebuchednezzar I, be identified with the neo-Assyrian king of similar reign-length, Sennacherib, conqueror of Babylon, whom C. Jonsson claims was actually king of Babylon a year before his becoming king of Assyria.[11] Nebuchednezzar was a noted devotee of the Assyrian god, Adad[12]. It is thought that both Sargon II and Sennacherib (whom I have previously identified as one) had, somewhat modestly, unlike Tiglath-pileser III, not adopted the title, ‘King of Babylon’, but only shakkanaku (‘viceroy’). We well know, however, that modesty was not an Assyrian characteristic. And so lacking in this virtue was Sargon II/Sennacherib, I believe, that historians have had to create a complete Babylonian king, namely, Nebuchednezzar I, to accommodate the Assyrian’s rôle as ‘King of Babylon’.

Finally, this reconstructed scenario now explains (to my satisfaction at least), why the Book of Judith (1:1) can call an Assyrian king, a ruler of Nineveh, “Nebuchadnezzar”.

Labels: A Historical Commentary on the Book of Judith, AMAIC, Australian Marian Academy of the Immaculate Conception, Revised History of Era of King Hezekiah of Judah 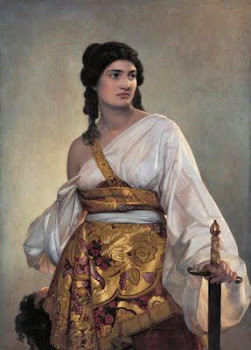